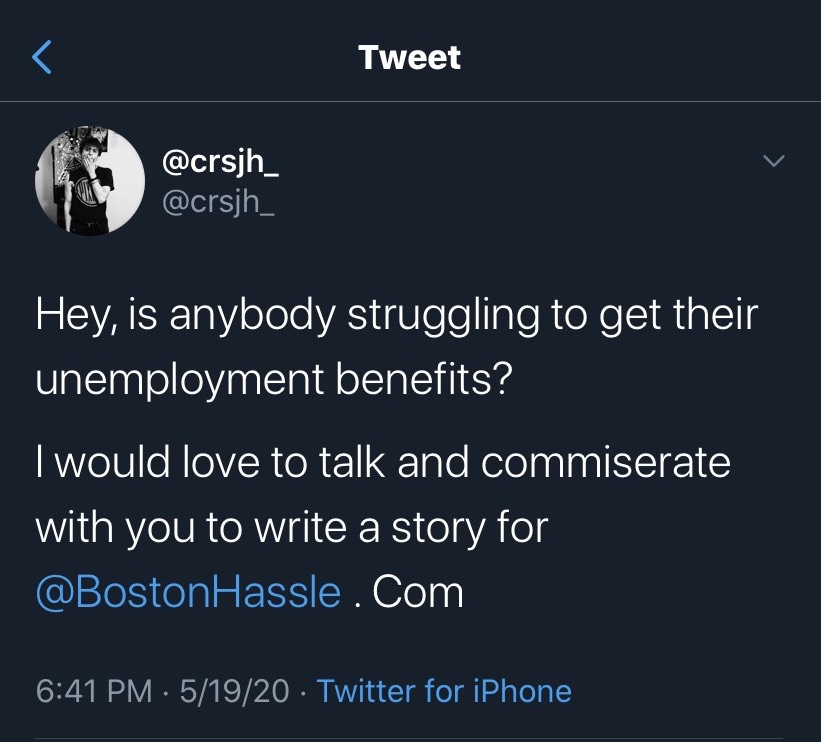 So as I may have hinted in the past, I am unemployed due to COVID-19, have been since March. Now if you are still working out there, while there is due cause to be jealous as hell, just know there is no bed of roses on the unemployment pastures or anywhere really, that I know of at least.

The stress of the unknown radiates through my collar bones and shoulders, weed can only take you so far, I miss shows and cafes, and beyond these things, dealing with unemployment is a hellish experience.

As you may have heard, there is now great uncertainty over whether the $600 /week PUA Federal Unemployment benefits will continue. If the additional aid does not pass, I’d be just short of fucked. Many other folks we know will definitely be severely impacted without this aid, nearly 1 in 10 Americans.

But aside from that, even in a blue state such as Massachusetts, the unemployment infrastructure in our states is dilapidated, outdated, just so horribly broken. And I was witness to this mass state failing from day one of the pandemic.

And just in case you are still working and have not experienced the dealing with the unemployment office, aside from just me griping, I have been making sporadic attempts at reporting on this crisis and thanks to a lot of call-outs I made months ago, and also, uh Reddit, I was able to compile some testimonies from some other folks who have experienced the same fate as I have.

“…I finally tried to call, it sounded like I legitimately spoke with a 17 year old that had no idea what they were doing, it was very unprofessional. I did not get any answers, at least the answers I was looking for. I suppose an explanation would be nice. They recommended that I try to apply for unemployment through NJ (where I used to live) but I had already claimed about a months worth of pay through MA’s so I am worried all that back pay would be lost.”

“I figured they’d finally get things going but nope. I called on May 18th after having filed weekly claims and still nothing, a mess of Automated messages in my account’s inbox (horrible system honestly). They blamed this hold up on employers not responding promptly, still one employer never responded. It was also odd that the guy on the phone with me had different info than I had, he claimed their online system, said “it’s very old and not user friendly,” but he did say from his end it looked like 2 weeks pay was in process…”

“Has anyone out there gone from being Paid, to several weeks of being stuck on Green Processing, to Red DENIED (and actually OWING money), and then to filing an appeal, to getting hearing scheduled and finally to actually getting a hearing? If so, what was the result of the hearing? I’m just curious as I’m now going into week 8 of not being paid and week 3 of waiting for a hearing to be scheduled and not even knowing if the DUA knows I even exist or not.”

“I have bills to pay, we all do, but a month to respond and seemingly another month to have them hopefully accept my correction is disheartening and scary. I have a job interview lined up as soon as the company feels safe having individuals in for interviews but I don’t know how soon that might be and when I’ll even be paid.”

See what I mean?

How could we not see this coming?

& This was all preventable. & If that was the case, by all logical reasoning, it is safe to argue that this virus is being indirectly weaponized against the working classes, or essentially anyone who doesn’t have the luxury to telecommute or send their children to private charter schools.

While I am fortunate enough to be on unemployment, my partner is not and is still working so there is constant for risk for us.

In fact, I emailed my doctor today in need of a COVID test citing headaches, aching throughout my body, and trouble sleeping.

The trouble sleeping part may be due to this heat and also, the fact that military police have been gobbling up protestors off the streets in Portland so much so that there is the #portlandkidnappings hashtag now.

Our lives have been turned into horrible PR stunts. As a reporter and an artist, there is irony abounding. Yet this irony is so bitter when it is blood-soaked.

"Harris is a perfect example of how someone’s identity does not prevent them from partaking in iniquitous malpractice, and in fact can provide a perfect cover for perpetrating them."

THE JONATHAN RICHMAN FILES, VOL. 1: AT THE GOVERNMENT CENTER

“Our lives are on the line”: COVID-19’s toll on preventable overdoses

CW: Opoid use and overdose