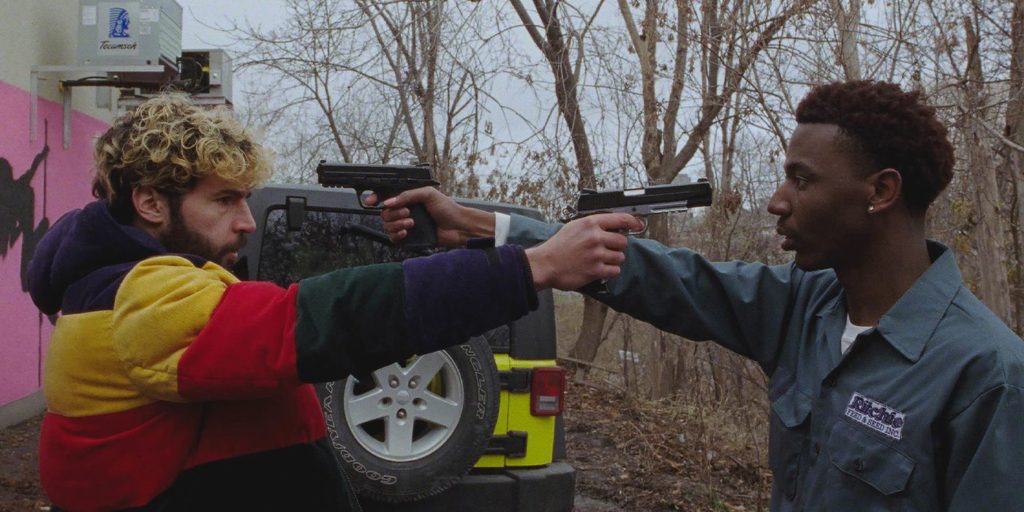 WARNING: On the Count of Three is not for everyone. Please take care of yourself first. Films are great, especially because they’ll always be there when you’re ready.

On the Count of Three, standup comedian Jerrod Carmichael’s first directorial full-length, is one of those movies that might be difficult to discuss, critically or casually. Its primary subject matter, in which two best friends make a suicide pact, is not easy to approach, even if the story floats right above comedic currents. As someone who has experience in a state-run psychiatric center, I find it an incongruous, and maybe inappropriate, tangent to relate my thoughts to Kevin’s (Christopher Abbott), who is committed after a failed attempt. All that being said (and at the risk of review-‘splaining how someone should feel about this movie, I won’t be saying much), Carmichael has conceived such an invigorating piece — and perhaps one of the most thoughtful this year — that whatever we might be going through, our reaction and relationship to the story are as evocative as a good story should be able to draw out.

Carmichael plays Val, Kevin’s best friend. After unenthusiastically accepting a promotion at his construction job, Val decrees that he would also like to end his life. After breaking Kevin out of the psych ward, they agree to kill each other at the end of the day. Making a bucket list of resolving childhood trauma, Val and Kevin whimsically (relatively speaking) choose to confront their abusers. Without needing to point fingers at the source, it’s apparent that there is underlying psychological stress behind each impulsive action or outburst — a purposeful tactic to avoid answering a common, misguided question: “Why would they do it?” Sketched as a Rogen-like buddy comedy running along the edge of emotional nihilism, On the Count of Three skillfully portrays a renewed definition of bleak humor.

It doesn’t always feel bad to laugh throughout the film, especially when the notes strike a particular chord. Even literally: the film’s musicality between the god-awful “Drops of Jupiter” softly playing behind an awkward conversation with a former high school bully and the self-aware “Last Resort” can make a solemn face break out into a guffaw. While the dialogue sometimes dips into antics carryover-quality, Abbott and Carmichael share chaotic quip-offs that can only work in a harmonious friendship. Abbott may be the crowd favorite, but one of the most standout pieces of dialogue in recent memory arrives in an early scene when Val reveals that he bought an engagement ring that he wasn’t able to give to his now-ex (played by Tiffany Haddish during a much-needed respite in the movie). Describing the permanence of stability as terrible, Val reveals a character perspective that is vulnerable and wistful.

It probably comes as no surprise that the ending is a bit divisive. It also doesn’t help that the last act ramps up to batshit-crazy heights (though achieved in an expected course), but Kevin and Val hoist the momentum onto their shoulders as they sprint from havoc-wrecking to havoc-wreaking across the town with gratifying delight. There was always the huge risk that On the Count of Three might disappoint, but in arriving to the final destination, the taste of bittersweet sorrow has never been more underscored than in this story.

On the Count of Three
2021
dir. Jerrod Carmichael
84 mins