Luke Kirby as Ted Bundy and Elijah Wood as Bill Hagmaier in the drama/thriller, NO MAN OF GOD, an RLJE Films release. Photo courtesy of RLJE Films.

Of all the personalities who have achieved ubiquity in the new media landscape, few are as unlikely as Ted Bundy. Over the past decade, the “true crime” narrative has become one of the most popular forms of entertainment, its potential for cliffhangers and speculation (to say nothing of its inherently lurid subject matter) the ideal vehicle for the “just one more episode” model that has come to dominate the podcast ecosystem and the Netflix-industrial complex. Within this framework, Bundy is a perfect storm: a name-brand serial killer whose modus operandi has long been incorporated into the realms of pop culture and urban legend, whose incarceration during the media-happy ‘70s and ‘80s means there exists a wealth of filmed and taped interviews to interpolate. Adding an additional level of unseemliness is the fact that Bundy was both charismatic and conventionally attractive (at least as serial rapist-murderers go). The 2019 release of the Netflix miniseries Conversations with a Killer: The Ted Bundy Tapes led to the unfortunate addition of the phrase “Ted Bundy stans” to the lexicon, a phenomenon which was only exacerbated when heartthrob Zac Efron was cast as the killer in that year’s Extremely Wicked, Shockingly Evil and Vile. There was a time when Bundy’s status came dangerously close to being downgraded from “historic monster” to “problematic fave.”

So one could be forgiven for rolling their eyes at No Man of God, the latest film to fictionalize Bundy’s reign of terror. Which is a shame, because it’s a fine piece of work, anchored on two outstanding performances, which scrutinizes, rather than exploits, the toxicity that can turn a figure like Ted Bundy into an international superstar.

At the outset of No Man’s story, Bundy (here played by Luke Kirby) has already been sentenced to death, whiling away his remaining allotted years in a Florida penitentiary. There he becomes the special project of FBI profiler Bill Hagmaier (Elijah Wood), who is part of a new task force assigned to interview various high-profile serial killers in custody in order to better understand their pathology. Bundy is considered the “short stick” assignment; he has a long history of manipulating and toying with prospective interviewers, and it’s generally agreed that the agent assigned to him won’t come away with much. But something about the softspoken Hagmaier draws out a new side of Bundy, and he soon finds himself forging a bond with the killer which appears for all the world something close to friendship. But the better he understands the murderer, the more he comes to realize just how easy it would be for an ordinary man such as he to allow himself to become the next Ted Bundy. 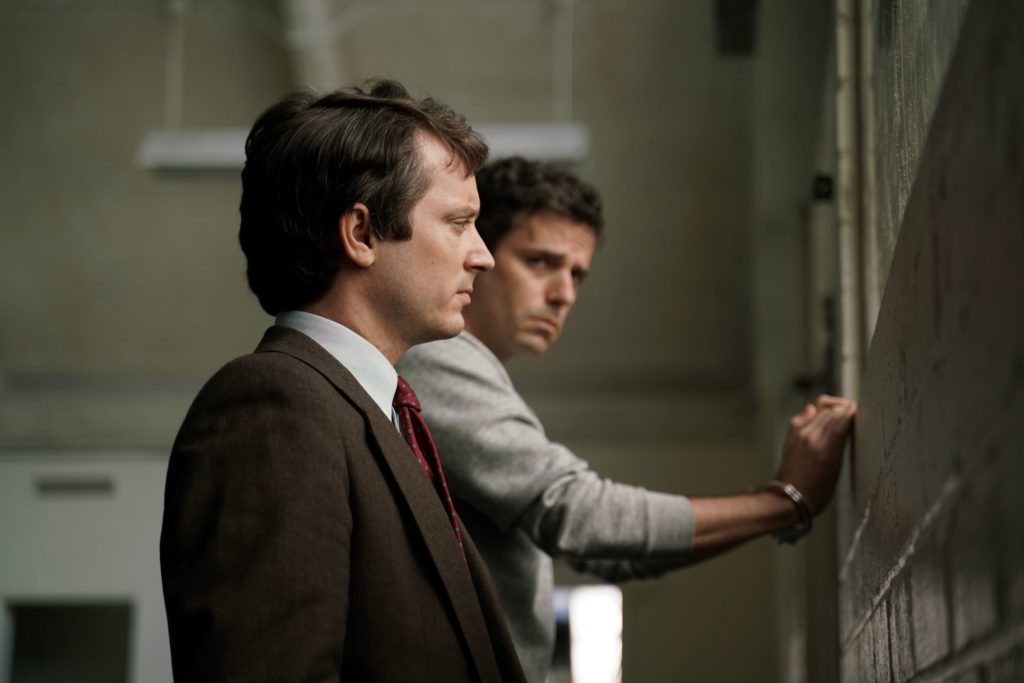 Elijah Wood as Bill Hagmaier and Luke Kirby as Ted Bundy in the drama/thriller, NO MAN OF GOD, an RLJE Films release. Photo courtesy of RLJE Films.

Wood has had one of the most fascinatingly unpredictable career arcs in Hollywood. After spending his ‘90s as a superstar child actor (he was the Pepsi to Macaulay Culkin’s Coke), he happened into the lead role in the biggest epic in movie history. A Frodo Baggins is the sort of role which can allow an actor to do whatever they want, but it’s safe to say no one expected Wood’s later-career turn as an enthusiastic producer of inventive, independent horror movies under his SpectreVision imprint (No Man of God was produced by a SpectreVision subsidiary, Company X). His performance here, however, presents a tantalizing glimpse of an alternate timeline in which Wood remained in front of the camera and developed into a mature, grown-up actor. Wood is entirely convincing as Hagmaier, a kind and perceptive man who is frightened by his ability to empathize with this monster. When Bundy’s attorney tells Hagmaier that the killer has described him as “his best friend,” we can see a dizzying range of emotions play across Wood’s face. Hagmaier isn’t some tortured Will Graham type, nor is he an ethereal Fox Mulder. He’s just a guy, and Wood plays him with a remarkably assured sense of reality.

Of course, a Ted Bundy movie is only as good as its Ted Bundy. Kirby captures the notorious killer’s transfixing charisma, but, crucially, he stops short of portraying him as some Mephistophelian superhuman. Kirby’s Bundy is smart, to be sure, and for the most part he’s collected. But every once in a while, Hagmaier will say something that rubs him the wrong way, or he’ll lead himself down a monologue to one of his shortcomings, and the facade will crack. We see that Ted Bundy is not the unstoppable force of nature a million true crime podcasts have made him out to be, but just a very sick man who spent decades dedicating his life to hunting and killing young women. When the chips are down, and Bundy’s turn in the electric chair is imminent, we see that he is just as scared as any of us would be.

Elijah Wood as Bill Hagmaier in the drama/thriller, NO MAN OF GOD, an RLJE Films release. Photo courtesy of RLJE Films.

The bulk of No Man of God is based directly on the actual taped conversations between Bundy and Hagmaier, and, subsequently, largely consists of lengthy conversations between the two men sitting at a table (it could just as easily be titled My Breakfast with Bundy). In a lesser director’s hands, No Man could have come off as creaky and stagebound. But, even more than Wood or Kirby, director Amber Sealey proves to be the film’s secret weapon. More than the killer himself, Sealey is primarily interested in the slippery slope which can turn the male gaze into unspeakable actions. As Hagmaier continues to internalize his subject’s methods, Sealey begins focusing her camera on the random women who happen to brush by him, or momentarily make eye contact. The camera pulls them into focus, implicitly sexualizing them as if we are being introduced to the story’s love interest. The twist is that there is no “meet-cute,” or a meeting of any kind; these are just extras, whose stories only tangentially intersect with Bill’s. This is No Man of God’s central thesis: every man is the protagonist in his own story, and can twist his mind into thinking any woman is his supporting character.

There are moments when the character dynamic in No Man of God feels overly familiar; Bundy’s conversations with the FBI, after all, were a primary influence on Thomas Harris when creating Hannibal Lecter, and subsequently cast a long shadow over the past thirty-plus years of crime fiction. But Sealey puts a spin on it that I don’t believe we’ve seen before. We don’t meet any of Ted’s victims, but they are placed front and center in the narrative, from the killer reminiscing in horrifying detail about his various quarries to Hagmaier’s race to get a confession out of Bundy to give their families closure. It is this truth which is so often lacking from contemporary true-crime pop-docs, which leads to such sickly spectacles as serial killer fan art. No Man of God is watchable and engaging, but I can’t imagine it spawning a “stan army”– thank god.

No Man of God is available In Theaters, On Demand and Digital Friday, 8/27