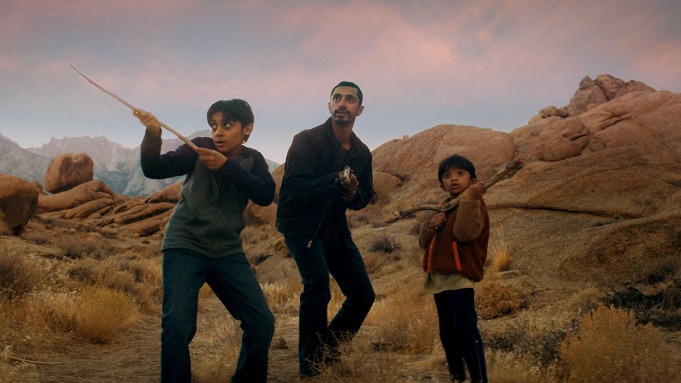 It’s a bit difficult to review the entirety of a film that is made of good things stained by a bad decision. Michael Pearce’s Encounter is marketed as a science fiction film which entices with an equitable talent of performers and a promising frontrunner as a Midwestern alien invasion B-side of the year. When Pearce and writer Joe Barton (notable of Netflix series Girl/Haji) had decided that this movie was better suited with a plot twist, I truly wonder.

Riz Ahmed leads the pack as Malik, a Marine  prepping for an all-out brawl with extraterrestrial beings that come in the form of bugs. Nothing especially different than Earth bugs: they’re winged, meddling, and exist best when they’re out of our daily lives. However, they carry the capacity of penetrating the human body and mind, so they pose a different sort of danger other than looking hideous. In the middle of the night, Malik takes his two sons, Jay (Lucian-River Chauhan) and Bobby (Aditya Geddada), from their mother for an undeclared mission to stop the bug invasion.

At this point, the viewer might find the mission’s plausibility to be askew, and the doubt becomes more palpable when Malik is unable to give straight answers. It also becomes sus when parole officer Hattie (Octavia Spencer) calls Malik and seems alarmed. However, in the power of rose-colored bonding with grown-ups, Malik’s paternal charm and casual ease into juvenile behavior wins his sons over. Who wouldn’t get excited at eating candy and urinating at the side of the road at the ripe age of 8? Chauhan and Geddada, bright-eyed and in wonder, dutifully coddles up to the role of adoring boys that cheer to Malik’s manic run-arounds and hardened dedication to the mission. For a moment, this feels like a monumental road trip.

Pearce crafts a vividly interactive turf in the Heartland in a way that electrifies the air more than Nomadland‘s neutral-purple hues in the negative space. Ahmed, who has now filled the quota of befallen men who get psychologically flogged in one’s acting career, expectantly nails this role; Encounter will most likely be another supporting rung to some great and memorable performances in years ahead. And I would be remiss to not mention the importance that is beyond the outer orbit of this contained story: a brown man that is able to frolic in the land of Second Amendments and square-jawed, Lego-forehead officers and make the next generation of brown boys as heroes in their own stories.