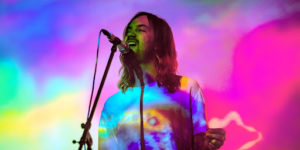 Tame Impala, multi-instrumentalist and jack of all musical trades hailing from Perth, Australia recently made a stop in Boston for the American leg of his tour in support of his fourth album release, “The Slow Rush.” Widely known for his symphony of vocals, guitar, and synths, Impala is a pure representation of the psychedelic rock and synth pop worlds. With good company in tow, we made our way through the arena with the collective understanding that a guaranteed good time was imminent.

Impala opened with the album’s first track, “One More Year.” Submerged by strobing lights and a blood orange moon in orbit, Impala seemingly invited us on an intergalactic journey to uncharted territory and we were ready to blast off. Once the song peaked and the wave broke, the crowd fell into the hum of a collective groove that swallowed us into an immersive, otherworldly experience and carried us through the rest of the night.

The concert had a solid setlist which included a sizable cross section of tracks from all of his albums, but especially “Currents” and “Lonerism.” It seemed that the order in which the songs were placed were very methodical and played a huge part in maintaining the uninterrupted flow of the night. Most notably for me was his performance of “New Person, Same Old Mistakes,” from “Currents.” The show’s encore- “The Less I Know the Better,” and “One More Hour-” was the tipping point that catapulted Impala’s performance beyond just a show into an intergalactic experience for everyone in the crowd- one that we still feel.