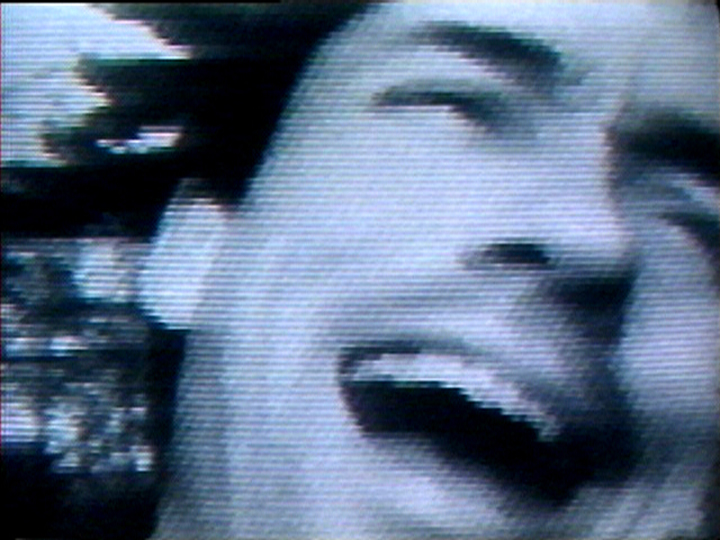 The first MassArt Film Society of the new year features two medium-length works by long-time Boston based experimental filmmaker, Joe Gibbons. Gibbons made national headlines this summer after he was sentenced to a year in prison for robbing a NYC bank–an act he filmed with a pocket videocamera to conduct research for a performance art piece he was working on at the time. For those that have only heard of Gibbons for this most recent transgression, the program at MassArt this Wednesday offers a chance to intimately get to know Gibbons (man and performer), his exploits, and observations.

The first of two works to be shown, Spying (1978), is a treat for the voyeur. Thirty-five minutes of furtive glances through windows, mail slots, and key holes at Gibbons’ neighbors as they perform rote tasks during the summer. Set against the flicker and grain of Super 8, these moving images impart a timeless quality to the activities of strangers and the allure of distantly gazing at them.

In Confessions of a Sociopath (2002), Gibbons turns the camera inward as he chronicles the past and present of a character named Joe Gibbons. Comprised of shots of Gibbons’ own theft, drug use, lively, diarisitc monologues, photo and film montages of his earlier years, etc., Confessions thickens the line between autobiography and fantasty, portraying a nuanced relationship between filmmaker, subject, and audience.

Friend and contemporary of Gibbons since the 1980s–filmmaker and MassArt Film Society programmer Saul Levine–will be on hand to introduce these two works and no doubt say a few warm, insightful things about this singular artist.

“Apart from being about the most fun I ever had in a movie theater, Joe Gibbons’ films are my most sound argument for the currency of real experience. Blatantly made up as they go along, they permit an immediacy of expression to exist that actually reminds me I’m alive and that anything can happen.”