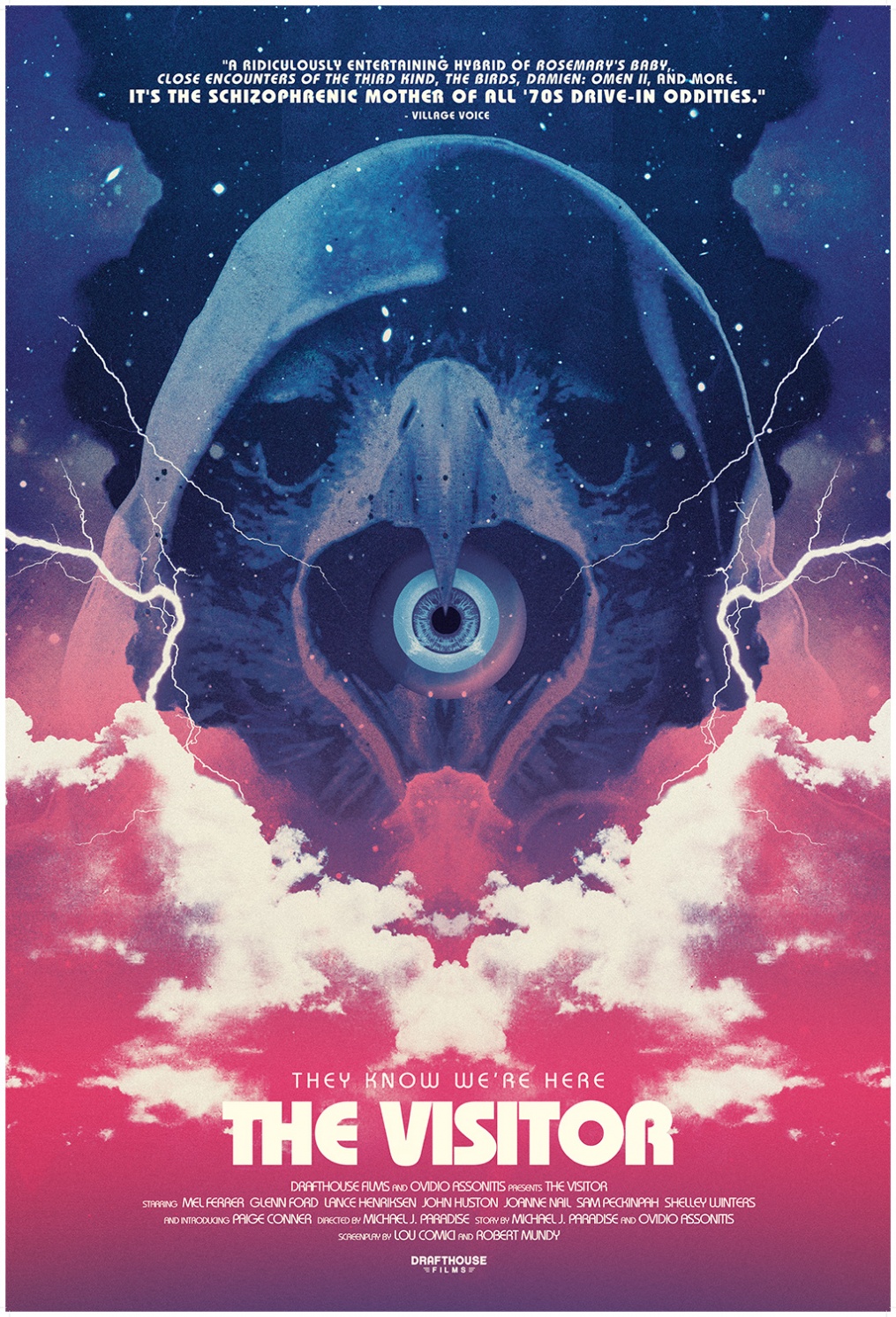 One of the things that makes psychotronic film such a rewarding obsession is that there is always– ALWAYS– a weirder movie. You can be the most hardcore underground film buff with the biggest collection of gray-market VHS tapes and you can still get a call from a friend telling you that you NEED to see the ancient Belgian children’s movie they found performed entirely by cats and rabbits in costumes (that’s not a hypothetical– it’s called THE SECRET OF MAGIC ISLAND, and it’s awesome). “Logic” and “physics” would tell you that there’s a finite amount of weirdness out there, but somehow there seems to be an endless array of treasures waiting to be discovered, frequently right under our noses.

Such is the case with THE VISITOR, the latest forgotten oddity to be exhumed by Drafthouse Films. It’s not a “lost” film, per se– it’s had a handful of home video releases over the years and its fans include indie-goth darling Zola Jesus, whose album STRIDULUM takes its name from the film’s original Italian title. Still, up until now, it’s lacked the cult necessary to earn the title of “cult classic,” which is more than enough to justify its current world tour.

Before I get into the meat of the picture, I want to get something out of the way. The promotional materials put forth by Drafthouse Films seem to posit it as some sort of all-out ’70s psychedelic mindfuck, along the lines of ZARDOZ or the films of Alejandro Jodorowsky. That’s not quite the case; while it has its share of casual surrealism and psychedelic interludes, it still has things like a “plot” and “characters” and scenes of “dialogue”. It’s weird, but it remains in the realm of basic narrative coherence.

That said, the film opens with a bleach-blonde alien Jesus figure (played by Spaghetti western staple Franco Nero) telling a roomful of bald children the story of an ancient space-demon named Sateen who escaped to Earth to impregnate women in the form of an eagle. Enter cosmic warrior Jersey Colsowicz (Hollywood legend John Huston, looking quite dapper in a white suit and bucket hat), who informs Space Jesus that he’s confirmed the name and location of the evil one’s latest progeny. Cue dramatic music and cut to… a basketball game in Atlanta, Georgia, where the local team owner (a shockingly young Lance Henriksen) sits with his girlfriend, Barbara, and her daughter, Katy, who proceeds to make the basketball explode with her mind.

Sure enough, Katy is the Sateen-child. What’s more, Henriksen is involved with a board of shadowy, nebulously-defined executive types (led by a bored-looking Mel Ferrer) who have tasked him with making more space-demon-babies. His work is seemingly made easier when Katy “accidentally” paralyzes her mother with a gun that “accidentally” made its way into one of her birthday presents through means never adequately explained. But Huston is hot on her trail… by which I mean he spends several scenes alternately watching bald men do interpretive dance on rooftops and walking slowly to wildly inappropriate music.

Before I get to unpacking the rest of the crazy shoved into this movie, I want to talk about Katy. Unlike every other evil movie kid in history, who mostly follow the Damien Horn outwardly-sweet-secretly-devious playbook, Katy is, from the beginning of the movie to the end, a nasty little shit. When a police detective asks her where the gun came from, she asks him to lean forward then whispers, “Up your ass!” then screams that he’s a child molester. She’s played by an actress named Paige Conner, and IMDb says this is her only role of note– which is a shame, because she’s kind of incredible.

Now, as promised, the crazy. Katy has a psychic connection with her murderous pet hawk (or maybe two hawks– there are shots of two clearly different birds, but I’m not sure we’re supposed to notice). Barbara’s idea of a cute present for her daughter is a talking peacock which endlessly repeats “I AM A PRETTY BIRD” in a Dalek-like shriek. The supporting cast is suitably bizarre, including Shelley Winters as a housekeeper who may or may not know Katy’s secret (I’m not being coy– it’s never quite explained what Shelley Winters is doing in this movie) and Sam Peckinpah as the world’s pettiest abortion doctor. The whole thing builds to an apocalyptic finale involving thousands of perfectly ordinary pigeons.

If THE VISITOR sounds like a mess, that’s because it is– it’s a sprawling, unfocused hot mess of a movie. But there are flashes of brilliance: a roadside abduction scene is effectively creepy– imagine an X-FILES episode directed by Dario Argento– and there’s a remarkably well-staged scene in which Katy maims some teenage boys on an ice-skating rink. The director, credited as “Michael J. Paradise”, is actually Giulio Paradisi, who was Fellini’s assistant director on 8 1/2; while it would be a stretch to say that the master’s influence is apparent, it’s clear that Paradisi took some notes.

Tonight is the final night of THE VISITOR’s run at the Brattle, but I recommend making the effort to see it. If you think I’ve spoiled the best parts, I assure you I haven’t– you wouldn’t believe me if I described Henriksen’s final scene. Drafthouse is reportedly preparing a DVD release, but movies like this beg to be viewed with a roomful of people who are just as dumbfounded as you are. I promise you it will be the weirdest movie you see this month– until you uncover the next one.