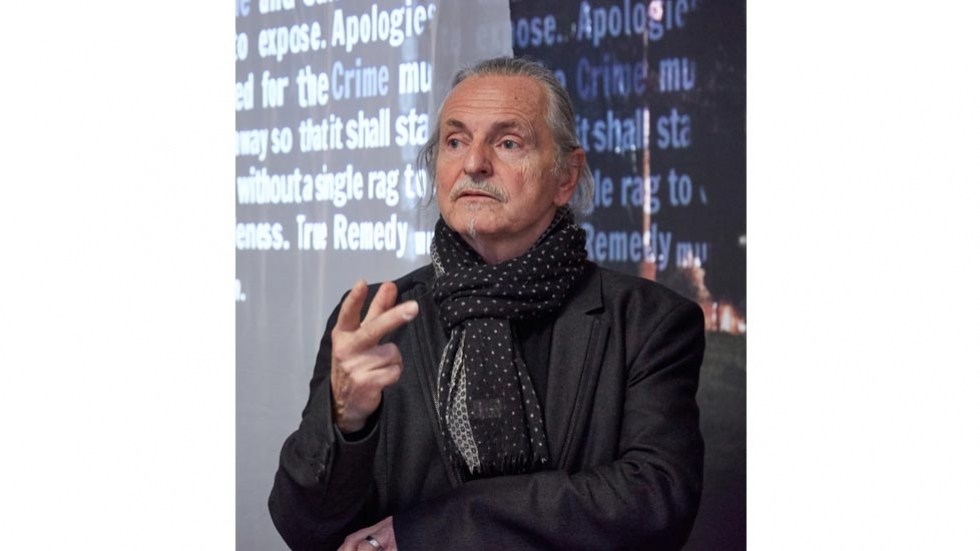 John Harvard Projection  is a large-scale projection installation by the artist Krzysztof Wodiczko, commissioned by the Harvard University Committee on the Arts. The public projection animates the John Harvard statue with the faces, voices, words, and gestures of Harvard University students, based on a series of recorded video interviews conducted by the artist. The compiled and edited interviews are projected onto the statue to make it appear as though John Harvard speaks, superimposing on his image contemporary reflections by students and connecting the historical statue with the present moment.

Krzysztof Wodiczko makes large-scale slide and video projections that animate public buildings, architectural façades, and monuments.  His projections invite participants into a process of bringing to life the built environment with images of their faces or hands and the sounds of their voices. Exploring the impress that architecture and monuments have on our collective memory and understanding of the past, Wodiczko’s deeply engaging and thoughtful works imbue engrained historical continuums with personal perspectives, recovering an intimacy in broader social, political, and institutional narratives. Krzysztof Wodiczko is Professor in Residence of Art, Design and the Public Domain at the Harvard Graduate School of Design.

In association with John Harvard Projection, Wodiczko will give a talk about his work, followed by a conversation with James Voorhies, the John R. and Barbara Robinson Family Director of the Carpenter Center, and Silvia Benedito, Assistant Professor in Landscape Architecture at the Harvard Graduate School of Design.

John Harvard Projection is sponsored by the Harvard University Committee on the Arts (HUCA), a university-wide body charged with advising the president and provost on developing policies and plans that will enhance the presence of the arts at the university and make them a central component of the university’s educational mission.

Liked it? Take a second to support CEEK on Patreon!