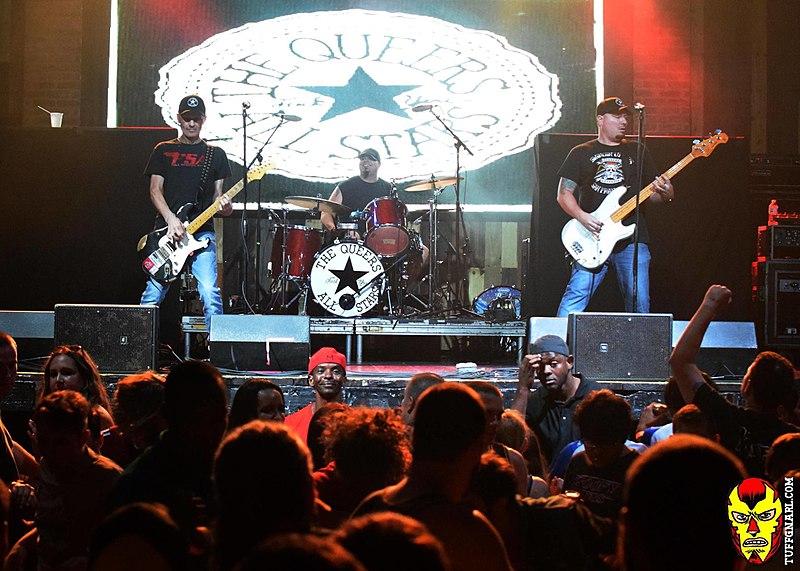 The Queers are a pop-punk band implanted in New Hampshire over 40 years ago. Though, when I say pop-punk, I am not talking about Blink 182 — I am talking about The Ramones and The Beach Boys having love children with foul mouths and attention-getting compositions. This year The Queers have been touring nationally and globally for their 40th anniversary.

I recently had a chance to catch up with their founding member, Joe King, AKA Joe Queer to ask him a few questions that I have been chomping at the bit to ask!

Hassle: How was your show last month in Boston?

JOE QUEER: I saw a ton of people I knew. So many friends. I love Boston, they have a great scene.

Hassle: Has your band’s name affected you?

QUEER: I wrote “You’re Tripping” in 1990, stating “This is not Nazi Germany” back when we were being attacked by the right side. Now we are attacked by both sides. If I had a dime for every time I was attacked for our band name, I would be rich. Our fans don’t care though. We played in front of 35,000 people for Punk Rock Bowling and nobody said a thing about our band name. If they do, then they aren’t our fans.

Hassle: What did you do to support yourself as a musician as The Queers were evolving?

QUEER: I worked as a commercial fisherman for many years out of Gloucester Mass, Portsmouth, New Hampshire, and Portland, Maine.

Hassle: How did you end up in Atlanta?

QUEER: I had moved out of my apartment in Exeter, New Hampshire, and went on tour. I moved in with my then girlfriend, who is now my wife. It took me a while to adjust. The people are nice, the winters are nice, and it’s cheap to live here.

Hassle: I noticed that you have been selling guitars online, have you quit playing guitar?

QUEER: No, I practice every day, for at least 45 minutes. I practice as if I am going on tour with The Queers tomorrow. People have asked me if I have carpal tunnel, because they don’t see me playing guitar. I build and sell guitars, always. Singing is better for me when I am not playing guitar, and Ginger playing is really fun to watch.

Hassle: Tell me about your relationship with The Ramones?

QUEER: We opened for them three times. I knew Joey the best. You know what got that man up and out of bed every day? It wasn’t money, it was music. He asked me to help him with a couple of songs, and I had to pinch myself {…}. Check out some of CJ Ramone’s solo stuff if you like pop punk. CJ is a great bass player, songwriter — one of the best out there. You can really hear Joey singing through him. We recently played a show in California and Richie was there. We brought him out on drums and played a couple of Ramones songs. The crowd went wild.

Hassle: What’s up next for The Queers?

QUEER: We are touring for a couple of weeks out west in September, and then going to Europe in March.